Complete Pakistan Cricket Schedule 2021 with fixtures of all upcoming cricket series of Pakistan during 2020 to 2023. The 2020 schedule for Pakistan Cricket team includes ICC T20 World Cup, PSL along with other ODI, T20 and Test series throughout the year. The Pakistan team will also compete in the inaugural ICC Test championship during the next four years, under the ICC Future Tours Programme (FTP). You can find here the list of all domestic and international cricket schedule for the Pakistan team including PSL, T20 World Cup and ICC bilateral series. 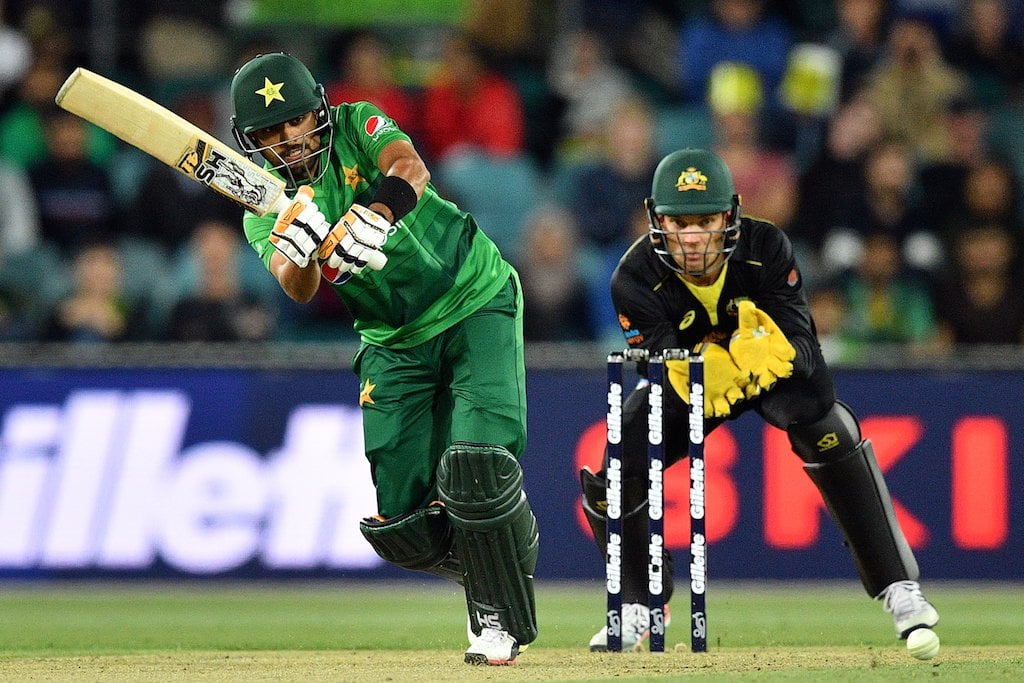 The Pakistan Cricket Board (PCB) Chairman Ehsan Mani has confirmed that Pakistan have lined up 10 bilateral series in 2021 and would play around 9 Tests, 20 ODIs and 39 T20Is during the year. In addition to bilateral series, the Pakistani team will also participate in major ICC events during 2021-22 season that include ICC T20 World Cup 2021, Asia Cup, ICC T20 WC 2022, ICC World Test Championship and ICC World Cup Super League as per confirmed schedule dates.

Here’s the Pakistan Cricket Schedule with a list of confirmed ICC and domestic cricket series in year 2021 to 2023. Get updates for series dates and venues of all upcoming tournaments (both home & away) along with fixtures of each match during each series here. Click on the series to see details of all matches (T20, ODI & Test matches). Pakistan Cricket Schedule 2021 here gives you details of dates, venues and match timings given in GMT, EST and PKT (Pakistan local time) for your convenience, errors excepted:

With its recent performance, Pakistan are favorites in the T20 World Cup tournament this year. Pakistan is set to begin its T20 World Cup campaign on Sunday October 24 against rivals India at Dubai Stadium. The next match for Pakistan is on Tuesday on October 26 against New Zealand followed by match against Afghanistan (October 29), winner of Group B (November 7) and runner-ups of Group A (November 2).
T20 World Cup 2021 | Schedule | T20 WC Points Table

*While the T20 leagues are not part of the Pakistan cricket schedule, we have included it here because most of Pakistani players participate in these T20 tournaments and leagues and are of great interested to cricket fans in general.

The PSL 2022 is set to begin in February with the final match in last week of March. The final match list is yet to be announced by the PCB. This year PSL matches will be scheduled across multiple venues. There are no major changes in any of the six teams. The inclusion of more big names will, for sure, boost the excitement. Unlike previous edition, crowd are allowed at limited capacity in both stadium. At the group stage, all six teams will play 30 matches followed by the play-offs and finals.

The Pakistan team is scheduled for various T20, ODI and Test series as per ICC Future Tours Programme. According to latest Pakistan cricket schedule, this also includes Pakistan Super League (PSL) to be held each year during February – March period. In addition to bilateral series against England, South Africa, Sri Lanka, Bangladesh and Australia, we also have multiple ICC mega events. These ICC events include Asia Cup and T20 World Cup in 2021, followed by 2022 T20 World Cup and 2023 ICC Cricket World Cup.

Pakistan vs England series schedule is already out that will begin on August 5 until September 1. The series consists of a total of 9 matches including 3 practice matches, 3 Tests and 3 T20s. Pakistan tour of England earlier included T20 and ODI series against Ireland and Netherlands but the series has been postponed for a later date.

Pakistan team is also scheduled for a tour to New Zealand during December 2020 and January 2021. The tour, as per ICC FTP and Pakistan cricket schedule, is part of the bilateral arrangement between the two countries. Both teams will play 2 Test matches and 3 T20Is in New Zealand. The Pakistani team will head back to play the 2021 PSL at local grounds in Pakistan.

The South African team is scheduled to tour Pakistan for a 2-match Test series and 3-match T20 series in Jan / Feb period. Both teams play this bilateral series as part of their FTP program set through ICC for the period of 2020-23. After the PSL in March, Pakistan is set to tour the South Africa to play 3-match ODI series and 4-match T20 series in April. Originally, the tour only included three T20 matches but an additional T20 was added to the schedule. The CSA requested the extra match as part of their preparation for the upcoming T20 World Cup event.

After back to back tours of Zimbabwe to Pakistan, Pakistan will reciprocate through a short tour in May 2021 where both teams will play two Tests and three T20 matches. Pakistan considers this as a great opportunity to prepare just ahead of the Asia Cup and T20 World Cup.

Pakistan and England both have busy schedule ahead in Summer 2021. It all starts from Pakistan tour of England in July where both teams will play a 3-match ODI series followed by 3-match T20 series. Later, England is set to play a 2-match T20 series during a short tour of Pakistan just before heading to India for the ICC T20 World Cup event. Both team also face off each other at the mega event later October.

Some great events are part of the Pakistan cricket schedule in 2021 including PSL, Asia Cup and T20 World Cup. Pakistan Super League is scheduled for February and March with all matches to be played in Pakistan. After South Africa tour, Pakistan will prepare to host Asia Cup 2021 in June in Sri Lanka. The other ICC event where Pakistan will participate is ICC T20 World Cup 2021 to be hosted by India. The tournament will begin in October as per revised itinerary and Pakistan will most likely tour India.

The Asia Cup is scheduled June where Pakistan is hosting the tournament at a neutral venue in Sri Lanka. The event was earlier postponed and has been rescheduled for June this year. While ACC confirmed that the tournament will be hosted by Pakistan, it was decided later that it will be hosted a neutral venue. India is the defending champions and its participation is as important as the host team. Both India and Pakistan will face off each other at yet another ICC event this year.

The 7th ICC Men’s T20 World Cup in 2021 is all set to be played in October and November in India. As an important part of the Pakistan cricket schedule, Pakistan will play against the host India, Australia, Bangladesh, England, Sri Lanka and other teams during the ICC mega event. The event will see a total of 16 teams with 45+ T20 matches including semi-finals and finals.

What’s next for Pakistan team?

We are keeping an eye on international as well as Pakistan cricket schedule and changes in ICC FTP Programme for all teams. Since many series have been either cancelled or postponed, and many series rescheduled, it is hard to speculate on how the FTP fixtures will hold during the 2020-21 period. We will keep the Pakistan cricket schedule updated with all upcoming series on this page, so be sure to bookmark and keep visiting this page for all changes as they happen.

As mentioned earlier, Pakistan will continue to participate in 2021, 2022 and 2023 ICC events including two T20 World Cup events, Asia Cup and later the ICC Cricket World as per confirmed schedule.

What are the main Pakistan series happening this year?

The 2021 season starts with Pakistan hosting New Zealand. According to the Pakistan itinerary, the other important series for Pakistan are against South Africa, the Pakistan Super League, Pakistan tour of South Africa, Zimbabwe and then England. Other ICC events where Pakistan will participate are the Asia Cup and ICC T20 World Cup 2021.

When will cricket come home to Pakistan?

The cricket is back in Pakistan. Pakistan has successfully hosted major teams including Zimbabwe, New Zealand, South Africa and players from almost all other countries through PSL. The prospects are looking positive with most teams to join us in Pakistan. Current series against international teams will open doors to more full-fledged series to be played in the country.

Is Pakistan hosting any series during 2021 schedule?

Pakistan has finally brought cricket to home through Pakistan Super League as all matches were played at local venues. Bangladesh also agree to visit Pakistan this year but the series was postponed due to COVID-19 lockdown. With the return of cricket through PSL, PCB has asked other teams like West Indies, Sri Lanka, England and Bangladesh to come to Pakistan. No series is scheduled in Pakistan but Pakistan will be hosting Asia Cup in UAE and PSL final round in Karachi and Lahore at the end of this year.

What is the next series for Pakistan after England tour?

After the England tour in Jul-Sep, Pakistan was scheduled to play in T20 World Cup in Australia. But since the postponement of the event, Pakistan will now play against South Africa. The PSL play-offs and finals were also postponed in March so they are being moved to Oct-Dec period as well. Pakistan will also play a series against Bangladesh and Sri Lanka as per FTP.