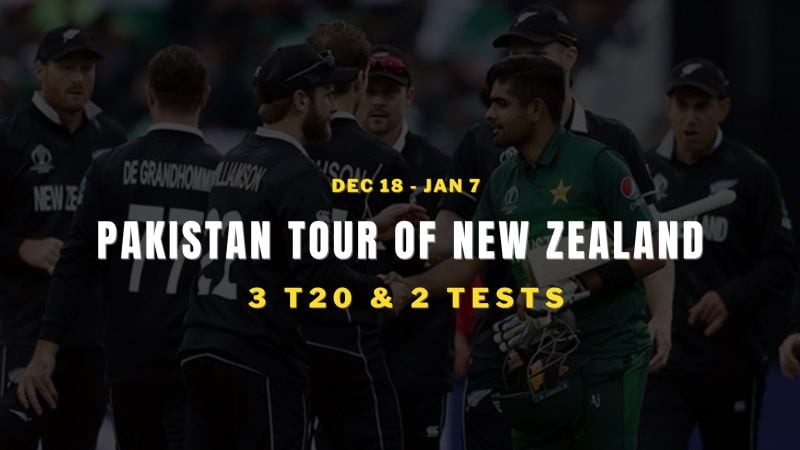 Complete itinerary and fixtures of Pakistan tour of England 2020 has been announced. The Pakistan vs England Schedule 2020 has been officially announced, a bilateral series arranged by ECB and PCB under ICC FTP during July-September period. It’s a two month long tour consisting of 3 Test matches and three T20I (without an ODI at this time). Pakistan also plays a tour match against Leicestershire followed by match against First-Class Counties Select XI. Later during the tour, Pakistan is scheduled to play 2 T20s against and 3 ODIs against Netherlands. Below is the full Pakistan vs England 2020 schedule with complete fixtures and time table of all matches, dates, venues and timing of matches in GMT, local and PKT (Pakistan local time).

You can now download PDF file of PAK vs NZ Schedule 2020
Please note that Pakistan vs New Zealand Schedule may be subject to change for any reason as may be required in the sole discretion of respective cricket boards including PCB/NZCB.
Complete Pakistan Cricket Schedule & New Zealand Cricket Schedule.

When does the PAK vs NZ schedule begins?

Both Pakistan and New Zealand will kick-off the series with 3-match T20 series starting from December 18, 2020 at Auckland.

How many matches will both New Zealand and Pakistan play?

Both Pakistan and New Zealand will play a total of 5 matches that includes 2 Tests and 3 T20s during Dec-January period.

How long is the Pakistan tour of New Zealand?

Pakistan tour of New Zealand in 2020 consists of about three weeks which will include few days of quarantine as required by the ICC and governing bodies.

Where are Pakistan vs New Zealand matches being played?

Due to COVID-19, it was assumed that venues will be kept limited but the final series schedule indicates all matches to be played during different venues, that include Auckland, Hamilton, Napier, Mount Maunganui and Christchurch.

How can I set free reminders for Match Timings?

You can set reminder through our match calendar which sets match timings according to your time zone. All T20 matches begin 11am PKT and 6am GMT and 1am EST time while Test matches begin at 3am PKT and 10pm GMT and 5pm EST time.

Like other fixtures, you can also download the PAK vs NZ schedule in PDF format. Just follow the PDF page from where you can either view the PDF file or download it for offline viewing.