Pakistan to Host Zimbabwe for three-match One day Internationals and three T20 International in October-November this year. The tour schedule has been officially confirmed by the PCB in press release today. Starting on October, we will witness both the teams in action by the end of the November. Pakistan will also host the remaining matches of PSL in Mid-November. Both the team last faced each other in 2018 in Zimbabwe where Pakistan dominated the Hosts in both T20 and ODI formats. 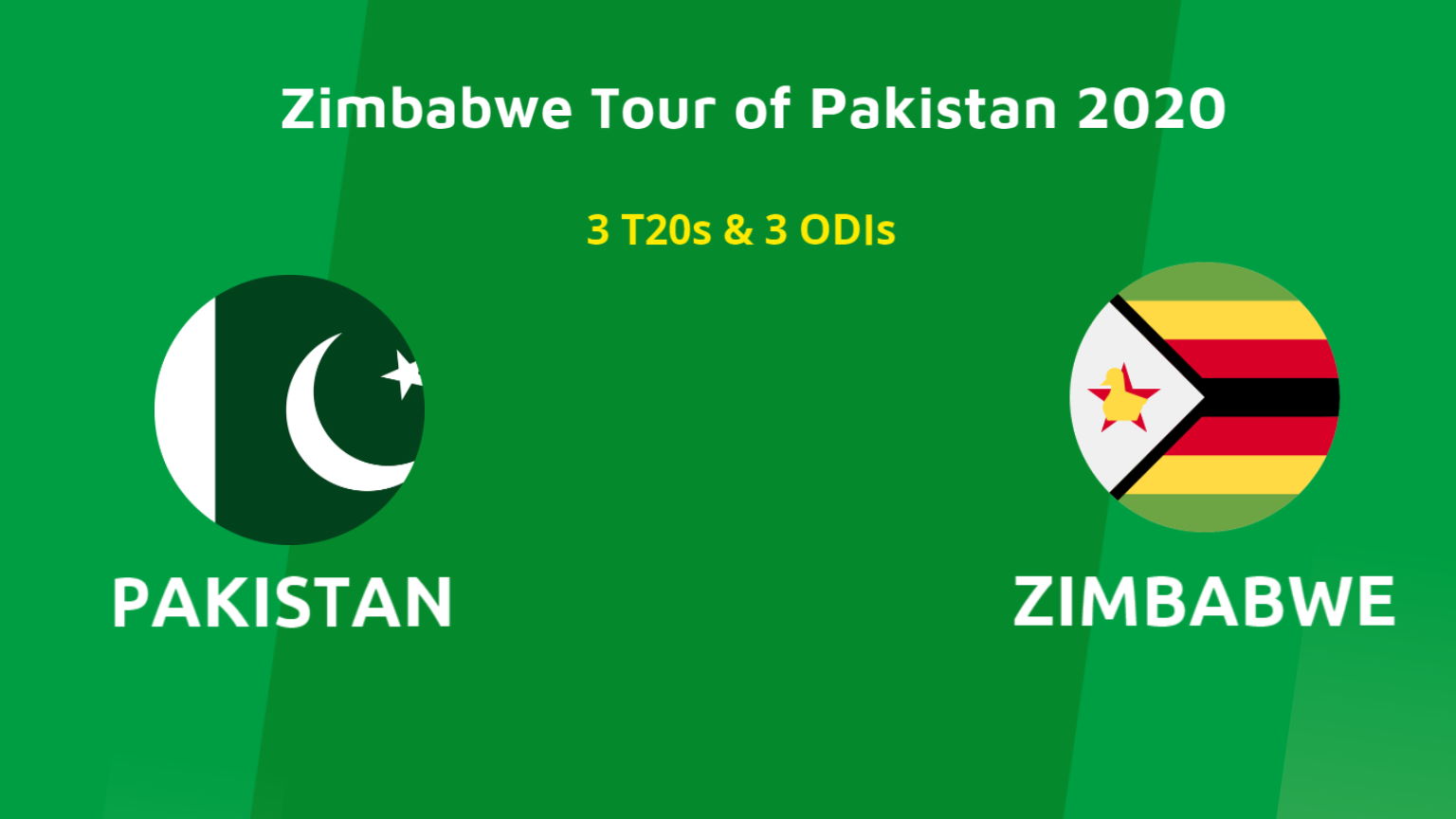 The Zimbabwe tour of Pakistan in 2020 is finally confirmed by Pakistan Cricket Board after long discussions and wait. The Pakistan vs Zimbabwe series is a bilateral series to be held in Multan and Rawalpindi. The series is part of the ICC Men’s Cricket World Cup Super League campaign and this is Pakistan’s first of the many upcoming series during the tournament.

In 2020, both teams will play three ODI matches followed by 3 T20 matches in Multan and Rawalpindi respectively. All matches, as ensured by the PCB, will be played in the bio-secure environment providing the guest team fully protected environment during the COVID-19 pandemic. Currently there are no matches scheduled in Lahore, Karachi and Peshawar.

There are a total of 6 matches including 3 T20s and 3 ODIs to be played during the Zimbabwe tour of Pakistan this year. The PAK-ZIM bilateral series is a part of the Future Cricket Tour Programs (FTP) which has been prepared by the International Cricket Council (ICC), PCB and Zimbabwe Cricket Board.

Pakistan vs Zimbabwe 2020 schedule has now been confirmed and it is available with all details including date, timing and venues. The 50-over matches against Zimbabwe will be played in Multan on 30 October, 1 and 3 November, which will be followed by three T20Is in Rawalpindi on 7, 8 and 10 November. While all efforts are being made to hold the series alive, we might expect delay/postponement or cancellation altogether due to COVID-19 crisis in Europe.

We will be updating this page for more updates about the PAK-ZIM series during coming weeks. CricketSchedule offers schedule, live scores, latest news, squads and players info of the Pakistan-Zimbabwe (PAK vs ZIM) series. Stay tuned for more updates.

Update 1: Venues for both T20s and ODIs matches have been scheduled in Multan and Rawalpindi instead of Lahore and Karachi. Changes are now reflected in the fixtures. There is no change in match dates and will be played accordingly.

Update 2: T20 World Cup has been postponed till 2021. Both Zimbabwe and Pakistan will continue to play 3 T20 matches which were part of their preparation for the mega event.

In ODI’s Pakistan is currently holds 6th position at ICC ODI ranking with 32 matches 3254 points while Zimbabwe is struggling with 14th rank at the table with 24 matches and 935 points. In the shorter format of the game, Pakistan holds 4th position with 23 matches 6009 points however Zimbabwe is ranked 11 with 18 matches and 3442 points.

Pakistan and Zimbabwe have faced each other in 59 One day internationals since playing first ODI in Benson & Hedges World Cup at Bellerive Oval, Hobart on Feb 27. Pakistan has won nearly won all the matches with 52 while Zimbabwe won only 4 times. One match was tied in 1995 while 2 matches ended as No Result. Pakistan and Zimbabwe played their first T20I against each other on 12 October 2008 in Canada Cup at King City ground. Both the sides are indulged in 11 matches with Pakistan had the better of Zimbabwean team in all of them.

Zimbabwe was the first Test-playing country to visit Pakistan for a limited over series in 2015 after the terrorist attack on Sri Lankan team Bus in 2009. They will be Pakistan’s first guests since the deadly Corona Virus halted all the sports activity in the country. In 2019 Zimbabwe Cricket was suspended by ICC over Government interference in Cricket Administration which meant No funding and participation for Zimbabwean in ICC tournaments. Three months later they were reinducted as ICC member after they promised to follow to guidelines set by ICC to Run Cricket Boards.

COVID-19 costed already Financial Struggling Zimbabwe series against India, Australia and Afghanistan. on the other hand, for Pakistan, the Novel Virus resulted in the suspension of Ongoing PSL in march and postponing n Second Test match between Bangladesh and Pakistan. Pakistan recently concluded their Tour to England in a Bio-secure Environment and are preparing for a protective Bubble for next in line Cricket commitments.

This tour will be part of ICC ODI super league where 13 teams will fight for 8 positions to directly for the next 50-over World Cup in India 2023. The 13 teams include12 ICC full members and the Netherlands who won 2015-17 Super league. India however automatically qualifies being the host of the tournament which leaves 7 places for the rest of teams. The main objective behind Super League is to bring relevance to ODI cricket for the next years. The Idea of securing a place in 2023 Worldcup will spice up the competition as a lot will be at stake. Each side plays four home and four away 3 match series. Each side play four home and four away three-match series Every team will earn 10 points for a win, five for a tie/no result/abandonment and none for a loss. The points secured in eight series will determine the position of each team.

Zimbabwe will have to lift their game in all three departments of the game to have any chance against the against Pakistan. Batting, bowling and Feilding Coaches need to address their basic issues, guiding them in the right direction and providing them with a plan to execute. The senior group have to prove their worth by leading from the front and setting up an example for youngsters to follow. A couple of games will not work for Zimbabwean cause until n unless they bring consistency to their game. Modern Day cricket Requires Specialists to command the game and the chevrons lack key players who can turn the match into favour with their extraordinary skills. They must find a permanent Captain to make greater on-field decisions. They have enough time to prepare for their uphill task before they land in Pakistan.

As the history between two nations suggests, For Pakistan, this tour will another smooth sailing over their favourite to beat opposition. The Green team will certainly look to introduce some fresh faces to their dugout. This particular tour will relieve some added pressure from the shoulders of Babar Azam, who needs to bring balance between his Batting and Captaincy role. Pakistan has made it clear to cricketing fraternity about conducting Home Series only in Pakistan but still, PCB will have to arrange foolproof security measures to disseminate a peaceful message to the rest of the World.

When does the PAK vs ZIM series begin?

The Zimbabwe tour of Pakistan begins with with three ODI matches on October 30. The last match will be played on November 10.

Both Pakistan and Zimbabwe will play a total of 6 matches that includes 3 ODI and 3 T20 matches during October-November period.

How long is the Pakistan tour of Zimbabwe?

Zimbabwe tour of Pakistan in 2020 consists of 21 days when the team arrives on October 20 and spend few days in quarantine as required by the ICC and governing bodies.

Who has more wins between Pakistan and Zimbabwe?

What are the series Venues for Pakistan vs Zimbabwe?

Due to COVID-19, matches are restricted to only two venues in 2020. All Warm-up matches, T20s and ODI will be played in Multan and Rawalpindi during this tour.

You can set reminder through our match calendar which sets match timings according to your time zone. All T20 and ODI matches are given in PKT, Zimbabwe and GMT timing.